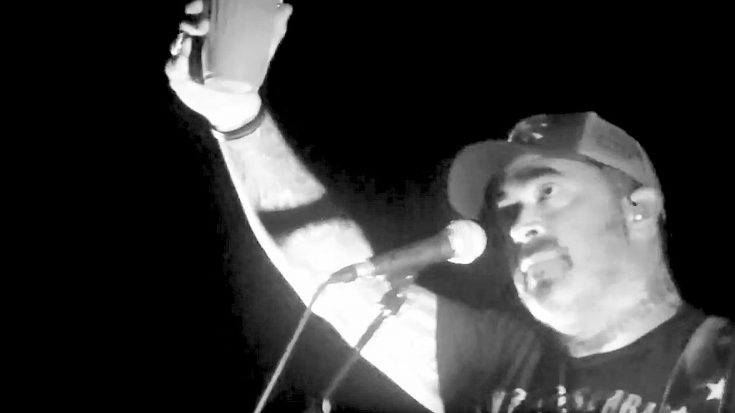 When Flag Day rolled around in 2017, Aaron Lewis honored the special day with the release of brand-new song. That song, titled “Folded Flag,” has quickly earned the status as a fan-favorite part of Lewis’ concert sets.

In early 2017, Lewis’ guitarist Luc Nyhus noticed three soldiers in the crowd at one of their shows. He approached the trio, and asked them if they would like to hear a song he wrote. Lewis looked on as Nyhus played them “Folded Flag.”

“The first time I heard this song, I watched three battle-hardened special forces soldiers cry after hearing it,” Lewis said in a statement to Big Machine Label Group. “I knew it hit home and I knew it deserved to be heard.”

Nyhus wrote the song with Marty Morgan and Jasmine Van Wilt. It tells the story of a newly-married soldier who leaves his pregnant wife behind when duty calls. Sadly, the soldier is killed in action before he ever gets the chance meet his unborn child or see his wife again.

The song is told from the perspective of the soldier after he has passed away. He watches two men fold up the flag that draped his casket so they can give it to his wife. As Lewis sings in the chorus:

“It’s probably more than I deserve. But I’m proud to get this much. Sending all the love I ever had, inside this folded flag.”

It’s always an emotional moment when Lewis performs the song at his shows. Such was certainly the case when he sang it during an appearance at the House of Blues in Las Vegas in September 2017.

A fan captured a video of the performance, which shows Lewis raising his glass in a toast before he started singing. “This song goes out to every soldier that didn’t make it home,” Lewis said. “[And to] the family and loved ones they left behind.”

After that, Lewis moved into a powerful performance of “Folded Flag” that surely left the audience with a lasting impression. It will do the same to you once you watch the performance in the video below.

If you’d like to hear “Folded Flag” in its recorded form, you can do so by downloading the song here.

Our hats go off to Lewis for recording such an important song. We’re sure it means a lot to many of his fans.