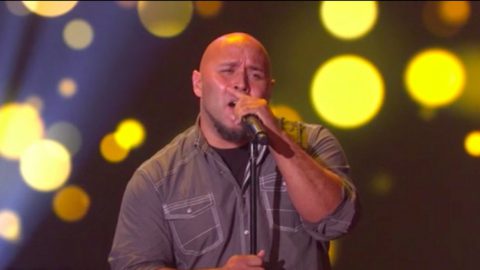 Roughly one month ago, Kris Jones appeared on The Ellen Show where he performed the George Jones classic “Tennessee Whiskey.” The appearance came on the heels of Kris’s viral performance of the tune that was captured by his 15-year old daughter, Dayla.

In the video, posted to Facebook by his wife, Jones and his daughter are seated in the front seat of a truck in a Home Depot parking lot. Dayla begins to record her dad singing with the intention of only sharing the video with her friends. What happened next stunned the internet.

To date, more than 40 million people have viewed the original video of Kris Jones singing “Tennessee Whiskey,” gaining him an instant following. The only thing better than the original video is a little-seen clip of Kris rehearsing for his performance on The Ellen Show. This unedited clip shows the true talent of Kris Jones as he delivers a flawless cover of the song that made him a star.

Check out the video that took the internet by storm below. If you like what you see, follow Kris Jones’ Facebook fan page by clicking here.