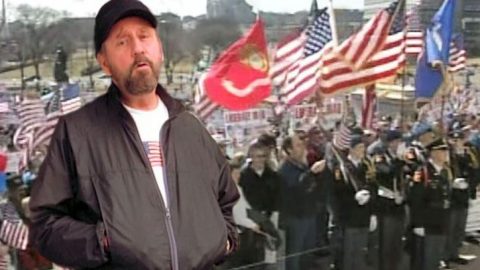 Country singer and comedian Ray Stevens strayed from his comical tendencies to produce a chilling video that packed an incredibly powerful “thank you” to our nation’s military. Deriving from his 2010 album Thank You, the song of the same name packed a punch that not only thanked the military for their noble service, but boosted the support from grateful Americans.

Dedicating the video to “all of our troops in the Army, Navy, Marines, Air Force, and Coast Guard,” Stevens kicked off his tribute by featuring footage of various men, women, and children showing their support for the troops and proudly showcasing the symbol of freedom: the American flag. “Reporters on TV/ Show protesters in the street/ Someone burns a flag/ To show just how they feel,” Stevens opened up, expressing his discontent with the disrespect aimed at the nation and those willing to sacrifice for it.

Showcasing footage of protest in light of wars and violence, Stevens admitted his disgust by those bold enough to disrespect our flag, and nation. He used this opportunity to “take the time” to proudly thank our brave military members, utilizing his heartwarming chorus to express his gratitude, as well as many others.  “Thank you/ Army troops in tan and green/ Navy, Air Force, and Marines/ Thank you/ For doing what you do/ For the red, white, and blue/ Thank you.”

The profound message resonated with viewers, expressing their satisfaction with the inspiring song that paid proper respects to the men and women who have served or paid the ultimate price for our nation’s freedom. We’re sure this song packs an explosive message that you won’t want to miss. You can watch the video below.