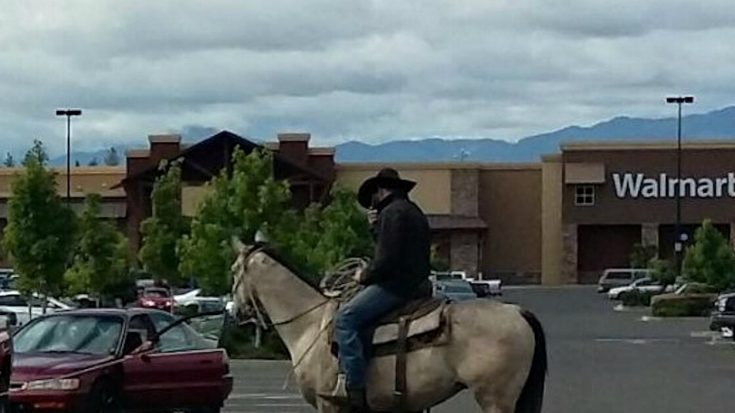 Mommas, it’s okay to let your babies grow up to be cowboys. Especially if they are cowboys like Robert Borba from Eagle Point, Oregon.

The 28-year old made headlines last summer after he came to the rescue in a Walmart parking lot in his hometown. Just like a scene out of a modern day John Wayne movie, Borba rode his horse to town for some dog food. As he was leaving Walmart he heard a woman screaming that her bike had been stolen.

Securities cameras show the thief speeding off on the bike…with a cowboy-laden horse not far behind.

“A couple swings and then I threw it at him, just like I would a steer,” Robert said.

After Robert had detained the thief, he used his cell phone to call 911 saying, “We got a guy who just stole a bike here at Walmart. I got him roped and tied to a tree,” he said on the call.

“What!?” the shocked operator said.

“I got him roped from a horse and he’s tied to a tree.”

Authorities arrived within moments to find the roped suspect on the ground at the feet of Robert and his horse.

When all was said and done, the humble cowboy simply asked for his rope back then tipped his hat to the small crowd as he rode off.

Kudos to Robert Borba for showing us that true gentlemen and cowboys still exist.

See footage of the incident and an interview with Robert Borba below.