The Band Perry Accomplishes A Rare Feat On Family Feud 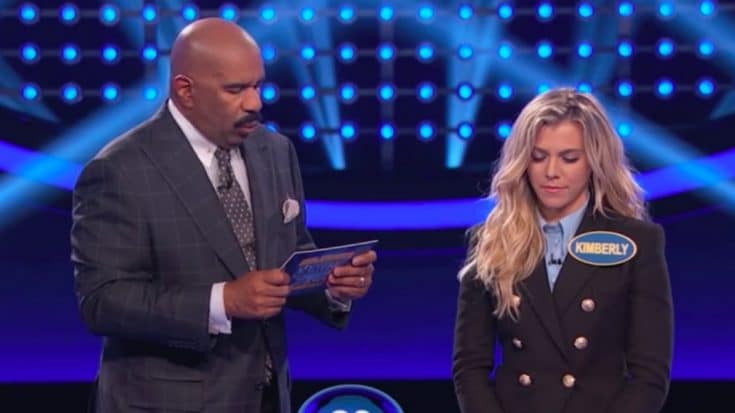 The Band Perry appeared on Celebrity Family Feud Sunday where they reunited with host Steve Harvey. The last time Harvey and the group were together was in December at the Miss Universe pageant where Harvey famously announced the wrong pageant winner.

At the beginning of the show, Harvey and the “If I Die Young” singers reminisced about the pageant leaving the door wide open for Kimberly Perry to make a joke about the host’s mistake.

“We did decide, if we don’t know an answer today, we’re just gonna say Miss Colombia,” she said.

Harvey chuckled and issued a warning to Kimberly that she was going to regret that comment.

The host had a chance for pay-back when during the show Kimberly gave an answer he didn’t feel was adequate. “It’s a really smart answer,” Steve Harvey responded. “The same way I felt when I said ‘Miss Colombia.’”

But it was Kimberly Perry who got the last laugh as she and the band went on to dominate the game against Giuliana Rancic’s family. During the Fast Money round, Kimberly Perry impressed by giving every single top answer and earning 196 of the necessary 200 points needed to win money for their charity, something rarely seen on the popular game show. Needless to say, her brother Reid had no trouble finishing what his sister started and earned $25,000 to benefit Teen Cancer America, the charity of their choice.

Watch Kimberly and Reid Perry slay the Fast Money round in the video below.