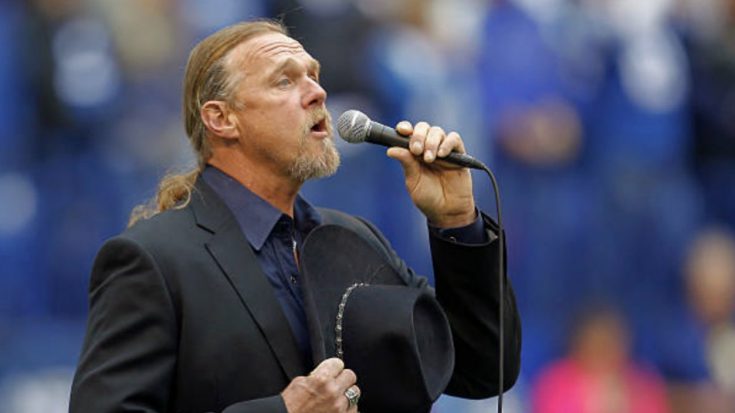 Country star Trace Adkins is a vocal and active supporter of the U.S. military, so it was no surprise that the deep-voiced singer was chosen to sing the National Anthem prior to a 2017 New England Patriots versus Miama Dolphins game at Gillette Stadium in Foxborough, Massachusetts.

The game was an NFL Salute to Service game, a special event honoring veterans and active duty service members and their families. According to the program’s website, the NFL along with the support of its 32 teams “takes pride in supporting military personnel and remains committed to raising awareness for the sacrifices they make on our behalf.”

With more than a dozen USO Tours to his credit, Adkins support of the military has become a vital part of his career.

“Truthfully, I’ve never played in front of a more appreciative audience than the troops,” Adkins told media earlier this year. He added that prior to his first USO Tour he asked Wayne Newton for advice.

“And he said, ‘Expect to feel guilty when you come home,’” Adkins recalled. “And that’s all he said. He left me standing there for a long time. But then when I went and did it and came home, I understood what he was talking about.

“They had to stay. You get to go home,” Adkins said. “You feel like they gave you more than you gave them.”

Trace’s reverence for the military was evident as he performed the National Anthem. He stood with his signature black hat placed over his heart as he sang the familiar words.

Watch Trace Adkins sing “The Star Spangled Banner” in the video below.