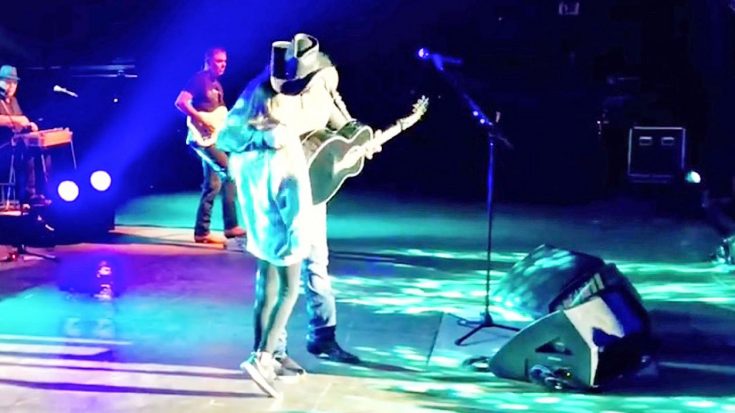 In March 2011, Trace Adkins released what is without a doubt, one of the most meaningful songs of his career. That song is “Just Fishin’,” and it became a Top 10 country hit following its release.

Written by Casey Beathard, Monty Criswell, and Ed Hill, “Just Fishin'” is told from the perspective of a father with a young daughter. He sings about a day they spend fishing together, and how his little girl thinks that fishing is all they’re doing. But the dad reveals that the day is about so much more, as the two of them bond and make everlasting memories.

As the father to five daughters, “Just Fishin'” was a song that clearly spoke to Trace. So when it came time for him to film the music video, he decided to give it a bit of a personal touch.

The music video for “Just Fishin'” was filmed on Trace’s farm and featured his youngest daughter, Trinity. It was her first time ever appearing in a music video, and she was only six years old at the time!

Trinity’s inclusion in the video for “Just Fishin'” is what makes it one of Trace’s most memorable music videos ever. Since they are father and daughter in real life, all of their actions were natural and genuine, which is why the video was so touching to watch.

All of that took place in 2011, and the song means just as much to Trace as it ever did. During a performance at Danville Harvest Jamboree in 2017, Trace and his band started playing the opening part of “Just Fishin'” before Trace stepped up to address the crowd.

“I don’t know if you recognize that song or not, or if you’ve ever seen the video,” he said. Then, he revealed a big surprise. “But the star of that video is here tonight.”

To the sound of cheers, Trinity came running from behind the stage and joined her father. The two of them shared a sweet embrace, and Trinity dashed away as quickly as she arrived.

“This song’s about her,” Trace said as she made her way off of the stage. He then moved into a heartwarming performance of “Just Fishin’,” which was made all the more meaningful since Trinity was there to hear it.

Now prepare for your heart to melt as you watch Trace sing “Just Fishin'” for his baby girl in the clip below. It’s too sweet to resist!

Trace recorded “Just Fishin'” for his youngest daughter, Trinity. He got to sing it to her last night at the Danville Harvest Jubilee!