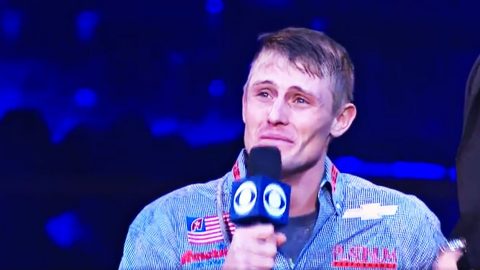 After winning the National Finals Rodeo and out-dueling the leading champion with an incredible show of skill and performance, this World Champion Roper made a decision that would change his life forever.

Announced as the newly crowned champion of the NFR, Tuf Cooper opened up his acceptance speech with traditional thanks and gratitude for those who had supported him throughout his career, Cooper then took the microphone from the announcer and decided he was going to make this night even more special!

Getting down on one knee and taking off his cowboy hat in the center of the arena, Cooper then spoke to the entire stadium and addressed his girlfriend, Tiffany McGhan, with tears beginning to fall from his eyes.

“I’m pretty nervous right now,” Cooper said shakily through the microphone before taking a knee. “Tiffany…you’ve got me through thick and thin.”

Tears welling up in his eyes, he paused before continuing, “I love you so much. Please come down here and make me the happiest man in the world!”

The crowd roared to life as he beamed from the stage and the announcers spoke excitedly about his proposal. While nobody knew what his girlfriend’s reply was in that moment, as he left the stage and made his way into the seats to find Tiffany, a nearby fan began recording his in-person proposal with her.

Watch both these amazing videos below to find out if she said “yes!”