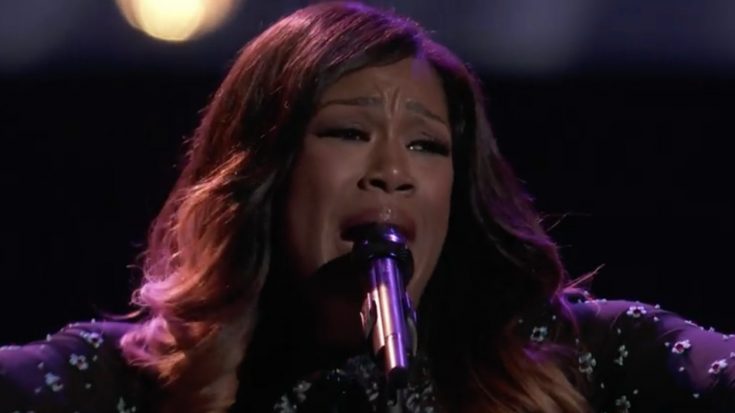 The odds seemed to be stacked in Team Blake’s favor during this 13th season of The Voice. Week after week Blake’s proteges take on some of country music’s biggest songs and knock them out of the park.

During Monday night’s live episode, the first of the season, Team Blake’s Keisha Renee tackled Trisha Yearwood‘s tune “Midnight Train to Georgia” and showed us once again why she is the one to beat. There is only one word to describe Renee’s soulful Top 12 performance: Flawless.

“Midnight Train to Georgia” might as well have been written just for Keisha Renee as her vocals soars effortlessly over the difficult melody, bringing a smirk of victory to coach Blake Shelton’s face.

The 30-year old former backup singer was one of the few Voice contestants who earned a four-chair turn during the Blind Auditions, proof that the coaches know a good thing when they hear it. In the weeks since the Blinds, Renee has wowed us with covers of Lee Ann Womack’s “I Hope You Dance,” The Judds’ “Love Can Build a Bridge,” and the classic Elvis tune “I’m So Lonesome I Could Cry.”

Hear Keisha Renee sing “Midnight Train to Georgia” in the video below.