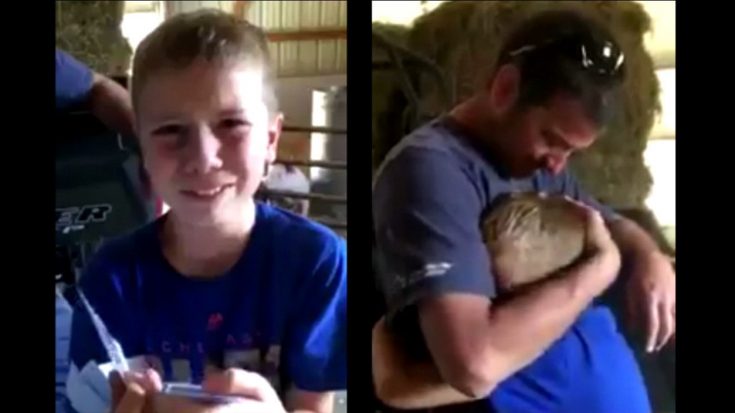 Nine-year old Kolt Kyler has been carrying around a baseball bat, ball and glove since he could walk and has been a Chicago Cubs fan almost as long. But, the young baseball player has never had the opportunity to watch his favorite team play in person…until now.

In an emotional video posted to Twitter by Kolt’s older sister, Hannah Himes, his father is seen surprising him with tickets to see the Cubs play at Wrigley field. The tickets were a reward for Kolt’s hard work, a gift Himes said is well-deserved.

“Kolt has been helping his dad on their farm for a couple years with their cows, but recently Kolt got two pigs to show for 4H for the first time so he’s had to work extra hard!,” Himes told ABC News. “He also made the travel baseball team again this year so he’s been busy with regular season, travel team, farm chores, cub scouts, and he is also an honor roll student!”

The day of his surprise had been especially busy for Kolt, according to Himes.

“He had a double header that morning/afternoon, he mowed our grandma’s yard and then came home for chores and that’s when he got his surprise,” she added. “Before he was given the tickets he was asked if he would help with something that would take a whole day to do, and not knowing what it was he still volunteered to help. I think more people in the world should take note of Kolt’s work ethic, attitude, and thankfulness.”

The video shows Kolt and his dad, Andy, leaning on a fence inside the family’s barn. Andy tells his son that he had been testing him to see how he’d react. And even though Kolt was tired, he worked hard and never once complained. Then Andy told Kolt that there was something the two were going to do together, something that would take a whole day to do it. As Kolt listens intently, his dad asks if it’s something he wants to do. Without knowing what he was getting himself into, Kolt agrees, obviously pleased at the thought of spending a day with his dad whether it’s working or playing.

Andy then hands Kolt an envelope containing tickets to the June 3rd game between the Cubs and the St. Louis Cardinals. Kolt almost immediately bursts into tears and hugs his dad before turning to his mom behind the camera and saying, “Me and Daddy are going to Wrigley Field!”

Himes posted the video on Sunday (April 16) and it gained steam online as media outlets and even Cubs players themselves reacted to Kolt’s tearful appreciation for his surprise.

@HannahHimes How are you enjoying your new career as your brother’s PR Agent? pic.twitter.com/h5gfkMO2RX

Watch Kolt Kyler cry tears of joy as his dad surprises him with tickets to his first Cubs game.