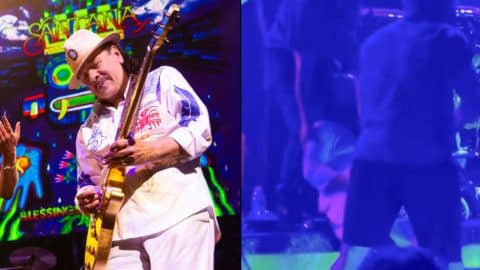 Shortly after legendary guitarist Carlos Santana collapsed on stage during a concert, his team issued an update on his condition.

In a statement posted to social media, Santana’s team shared that the 74-year-old musician was treated after suffering heat exhaustion and dehydration during his concert at Pine Knob Music Theater in Michigan on Tuesday night (July 5).

“Carlos was taken to the emergency department at McLaren Clarkston for observation and is doing well,” the statement read.

Santana was traveling with fellow rock legends Earth, Wind & Fire for their “Miraculous Supernatural Tour” that kicked off in June. It was announced following Tuesday’s incident that their next concert, scheduled for July 6th in Burgettstown, Pennsylvania, was postponed.

Video captured by concertgoers Tuesday show Santana performing on stage when he sat down in front of the drums before collapsing backward.

EMS and staffers immediately came to his aid. A black curtain was held up around the Grammy-winning guitarist to give him privacy as he was treated. It’s unclear how long personnel worked on the musician before he was carried off stage, but he was filmed waving to the crowd from behind the curtain as he was wheeled off stage.

#BREAKING: Carlos Santana just passed out on stage at ⁦@PineKnobMusic⁩. Medical personnel on stage. Crowd asked to pray for him because of a “serious medical” issue. Pic via ⁦@LoriPinsonFOX2⁩ pic.twitter.com/6VqHkBwVIT

This is the second medical scare in recent months for the legendary musician. Carlos Santana underwent a successful heart procedure in November 2021. In a video message released at that time, Santana said that he asked his wife to take him to the hospital because of an issue with his chest.

“I’m going to be taking time off for a little bit to make sure that I replenish and rest,” Santana said.

Santana has canceled all December 2021 at the House of Blues Las Vegas as he recovers from an unscheduled heart procedure. We look forward to returning to perform at the House Of Blues in January 2022. pic.twitter.com/8cHcVDjFhv

We wish Carlos Santana a full and speedy recovery.