Days After Suing The Band, Aerosmith Drummer Joey Kramer Reunites With Them At GRAMMY MusiCares Event

By Jennifer Pernicano on January 27, 2020
Advertisement 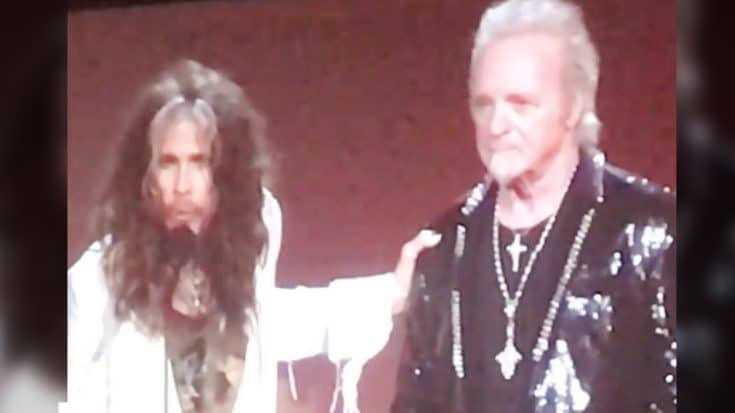 In 1970, Aerosmith was formed when members Steven Tyler, Joe Perry, Tom Hamilton, and Joey Kramer joined forces. During the next 50 years, the band would go on to become one of the most well-known bands in music history.

Because of their impact on the music world, the band was chosen as MusiCares Person of the Year, which is usually celebrated one night before the GRAMMY Awards. There are always tribute to the person being honored, as well as a special performance from them. In this case, Aerosmith also was slated to perform a medley of their songs during the GRAMMY Awards broadcast.

We’re ready to celebrate @MusiCares Person of the Year, @Aerosmith! ? We can’t wait to celebrate the songs, the onstage magic, and their enduring spirit of giving back. ❤️ pic.twitter.com/KN7VKOlgkF

Just days leading up to the awards ceremony, drummer Joey Kramer filed a lawsuit against the band.

Rolling Stone reports that the lawsuit states Kramer was unable to work with the band ahead of their Deuces Are Wild Vegas Residency because he was recovering from physical injuries. When Kramer felt he was ready to get behind the drums and play, he claim they required him to “re-audition” and record a solo session audition with him playing along to a click-track.

“This is not about money,” Joey Kramer said in an official statement. “I am being deprived of the opportunity to be recognized along with my peers for our collective lifetime contributions to the music industry. Neither the MusiCares’ Person of the Year Award nor the Grammys’ Lifetime Achievement honors can ever be repeated.”

“Joey Kramer is our brother; his wellbeing is of paramount importance to us,” the band said in response to the lawsuit. “However he has not been emotionally and physically able to perform with the band, by his own admission, for the last six months. We have missed him and have encouraged him to rejoin us to play many times but apparently he has not felt ready to do so.”

Kramer says he needed to prove he could “play at an appropriate level” which he claims is completely unorthodox for the band. All of these requirements are outside the scope of the contract he signed and there are no provisions that say he must perform these actions in order to return, according to Kramer. He says that he finally gave in and met their requests, but they still decided against letting him come back, with a vote occurring on January 15th.

“The fact that I would be asked to audition for my own job, demonstrate that I can play at ‘an appropriate level’ and play better than my temporary fill-in with a moving target of made-up standards is both insulting and upsetting,” Kramer continued on in his official statement. “Other band members and their lawyers will likely attempt to disparage my playing and claim that I am unable to play the drums right now. Nothing could be further from the truth. I did everything they asked — jumped through hoops and made both a recording of playing along solo to a recent live recording of the band — one I had never heard before, and that process was videotaped. But I did it, and I did it well. In Aerosmith’s 50-year history, no other band member has ever been subjected to this scrutiny let alone be asked to audition for his own job!”

Aerosmith rebutted, saying, “Joey has now waited until the last moment to accept our invitation, when we, unfortunately, have no time for necessary rehearsals during Grammys week” and that allowing him to play would be a “disservice to him, to ourselves, and to our fans [because there is not] adequate time to prepare and rehearse.”

While Kramer did not join the band for any performance this past weekend, he did join them on stage to accept their award. Steven Tyler spoke on behalf of the band, while holding Kramer’s shoulder. Then Kramer spoke, thanking MusiCares, his wife, and everyone in the music industry. He was the only bandmate besides Tyler to speak.

As Kramer walked off the stage, Aerosmith set up for their three-song set, without their original drummer.

Grand finale of last night! 50 years of music. 50 years of giving back. @aerosmith, you’ve inspired and helped countless others. ?❤️ We’re grateful for your contributions and support. pic.twitter.com/Z4EXHV4mhw

While introducing each band member at the end of the show, Tyler did shout, “Joey Kramer, where are you? We love you, man!”

Watch Tyler and Kramer’s speech during the MusiCares show below.

#joeykramer speaks at #musicares with #aerosmith. He was the only one besides #steventyler who gave a speech.