Ever Wonder What CMA Rehearsals Are Like For Brad & Carrie? She Just Shared A Clue… 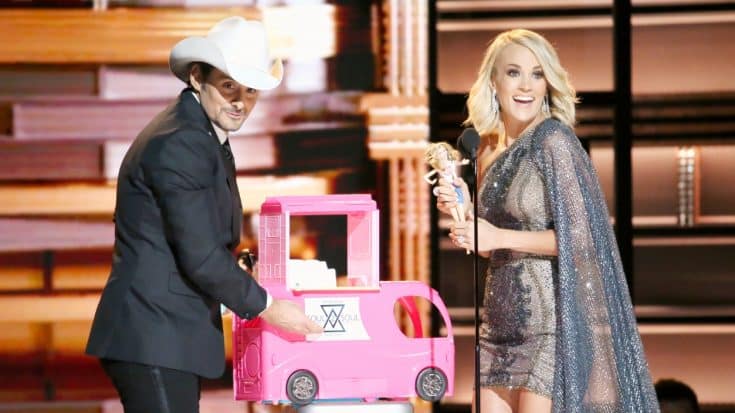 The 2018 CMA Awards will be here before you know it. More performers are being announced as days pass, artists are planning their red carpet outfits, and the show’s two hosts are hard at work rehearsing.

For the 11th year, Brad Paisley and Carrie Underwood are returning to host the awards. Together, the dynamic duo has helped create some of the most memorable (and hilarious) moments in the show’s history.

A lot of work goes into those comical opening bits, and Paisley and Underwood are heavily involved in the process. As the duo shared in an interview with People, they write the jokes and parody songs you hear every year.

Paisley is the one who pens the parody numbers, including the famous “Mamas, Don’t Let Your Babies Grow Up To By Kanye.” He used to rehearse the parodies around his sons at home, though in 2016 he learned maybe that wasn’t such a good idea.

As he explained, one of his son Huck’s classmates “ran out and was, like, singing me the parody, and I realized Huck had been in school and…this is what he’s gonna do.”

But short of Paisley’s sons singing his parody songs to their friends, every other element of his opening monologue with Underwood is kept tightly under wraps until the night of the ceremony. That’s why it’s such a rare thing to get a behind-the-scenes look at the duo’s rehearsals.

We’ve gotten tiny peeks at CMA Award rehearsals in years past, such as back in 2016. That year was a special one, as it marked the awards’ 50th anniversary.

Leading up to the show, Underwood’s sneak peek came through close up photos she shared of the outfits she would be wearing that night. Each outfit was meant to represent a certain era in country music history.

A look at another #CMAawards50 decade-inspired look for Wednesday night. Welcome to the #60s everyone! #CarrieByTheDecades #vintagestyle

So far, neither Paisley or Underwood has offered a glance at what’s going on behind the scenes as they prepare for the 2018 CMA Awards. However, Underwood did at least give us a small clue to what rehearsals are like when she shared a throwback photo from last year’s preparations.

In honor of Paisley’s birthday on Sunday (October 28), Underwood chose to recognize him with an adorable photo from the 2017 CMA Award rehearsals. The photo shows the two co-hosts gleefully snuggling some baby goats, making us wonder exactly how much work they got done at rehearsal that day.

Of course, Underwood had to write a witty caption, saying, “Happy birthday to this old goat, Mr. @bradpaisley !!!”

Happy birthday to this old goat, Mr. @bradpaisley !!! In celebration, enjoy this little flashback to last year’s @cma Awards rehearsals! Proud to call you my brother and friend! I hope today is amazing! ????

What Will Happen This Year?

No wonder why these two keep coming back to host the awards. If they get to play with baby goats as part of the job, that seems well worth the work!

While we still don’t have any clue what Paisley and Underwood have in store for us at the CMA Awards this year, we have a good guess about one thing they may do.

If you think back to the 2014 ceremony, Underwood was pregnant at the time with her son, Isaiah.

But no one knew she was expecting a boy until Paisley blurted it out in the monologue. This resulted in one of the duo’s most memorable moments as hosts.

Now, Underwood is expecting her second child, and has remained mum on the gender. Maybe she and Paisley will revisit what they did for Isaiah and announce baby #2’s gender in the same way!

Only time will tell if that’s what will happen. In the meantime, enjoy watching the first gender reveal in the compilation clip of best Paisley and Underwood hosting moments below.