Filming Has Started For “Yellowstone” Prequel: Get All The Details

By Miranda Raye on August 27, 2021
Advertisement 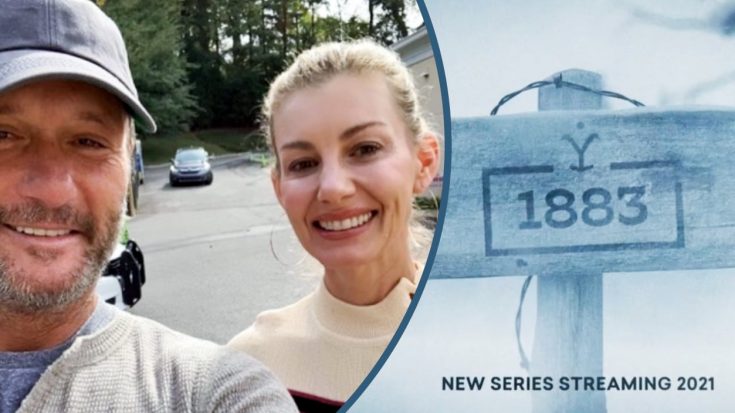 A lot is happening in the world of Yellowstone right now. For starters, we finally know when the show’s highly anticipated fourth season will debut (November 7). On top of that, we keep getting more details about Yellowstone‘s brand-new prequel series, 1883.

The new series will star Sam Elliott as a cowboy named Shea Brennan who leads a group of settlers to Montana. Tim McGraw and Faith Hill will play James and Margaret Dutton, the ancestors of the main series’ main character, John Dutton.

More recently, we learned that Isabel May joined the cast as Elsa Dutton, the eldest daughter of James and Margaret. LaMonica Garrett is another new cast member. He will play the right hand to Sam Elliott’s character.

Fans got a little look at 1883 when Tim McGraw posted two photos showing how he’s preparing for his role in the series. The first photo shows a Bible with a “J. Dutton” monogram, and the second photo shows a pair of jeans Tim stained during quick draw practice.

Progress is moving fast on 1883, as filming started on Wednesday (August 25) in Fort Worth, Texas. The Star-Telegram reports that “The Fort Worth City Council authorized temporary street closures in the Stockyards area in North Fort Worth from Sept. 1-17 for filming and production of the ‘Yellowstone’ prequel series ‘Y: 1883.‘”

According to The Star-Telegram, the closed streets will undergo a transformation to reflect the way they looked in the past:

“The closed sections will be transformed to look like the year 1883, with street lights removed and dirt in the roadways,” the publication explained. “The closures will also allow for equipment loading, unloading and staging.”

The cast and crew of 1883 has a lot of work to get done in a short amount of time. The show is set to debut on Paramount+ on December 19. That’s an awesome early Christmas present!

Want another look at what you can expect to see on the Yellowstone prequel? Check out the below photo of Sam Elliott sporting a new, long hairstyle that is presumably for his role in the series. He was photographed with Nicole Sheridan, who is married to the show’s creator Taylor Sheridan.