Lady A Surprised With Invitation To Join The Grand Ole Opry 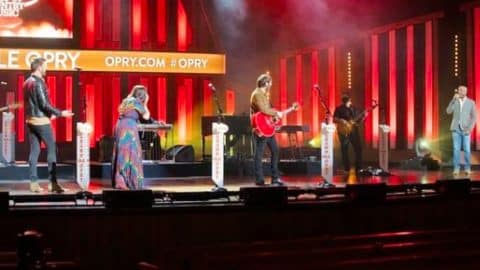 The Grand Ole Opry has some new members!

On Thursday night (January 21), the Opry was taping for an NBC special called Grand Ole Opry: 95 Years of Country Music. The special, which is set to air on February 14, will feature performances from some of country music’s hottest stars and will be hosted by Brad Paisley and Blake Shelton.

Hot off the heels of their song “Champagne Night” becoming a #1 hit, Lady A took to the Opry stage to tape a performance for the upcoming televised special. Little did they know, their good friend and Opry member Darius Rucker was waiting to ask them a life-changing question.

Rucker strolled out on stage and surprised members Charles Kelley, Hillary Scott, and Dave Haywood with an invitation to become the newest members of the Opry!

The Opry shared a photo of the moment when Lady A received the invite, and you can tell they were stunned:

“This is the best surprise we could ever ask for,” Scott said. “I’ve been coming here since I was a little girl so to say we are honored is an understatement. We are so truly grateful to officially be a part of this amazing family.“

Usually, those who are invited to join the Opry later become members through an official induction ceremony. But the Opry said Lady A’s membership will take effect right away.

The Warner Chappell Nashville Instagram shared a few more photos from the evening. Two pictures show Lady A with their membership plaque, and another shows them standing on the Opry stage with Rucker by their side.

Later, Scott shared a video of herself video calling her mom, country singer Linda Davis, to share the happy news. The video is touching to witness, especially knowing how Scott has been in the country music world her whole life because of her mom’s career.

You can’t really make out what Davis was saying, but you can tell she was just as emotional as her daughter.

The Opry also shared a video on Twitter that shows the moment when Rucker invited Lady A to join the Opry. Scott was the most visibly shocked, and burst into tears after Rucker extended his invite.

Tune in below to see that video.

You can tell how excited Kelley, Scott, and Haywood were to learn they were the newest members of country music’s most iconic institution. Congratulations to them!

BREAKING: @LadyA was surprised with an invitation from @dariusrucker to join the Grand Ole Opry during the group’s performance taping for the upcoming NBC special, “Grand Ole Opry: 95 Years of Country Music” airing Feb. 14. pic.twitter.com/GVjSiFlaAL