Mystery Behind The Giant Xs In Arizona Desert Solved 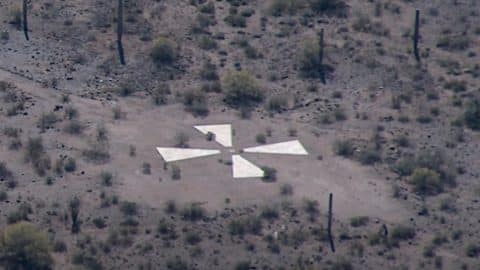 Giant Xs that are a colossal 60 feet wide, one mile apart, and scattered throughout the Arizona desert have been a mystery for the longest time. However, they have been revealed to be a government program called CORONA.

The U.S. set up the CORONA program as a way to spy on China and the Soviet Union during the Cold War. Satellite cameras at the time had poor quality and authorities used the Xs to arranged a grid pattern for calibrating the cameras.

According to Wide Open Country, the CIA said, “CORONA was created by a small group of CIA, Air Force and private industry experts who were tasked with finding a way to provide broad imagery coverage of the USSR to identify missile launch sites and production facilities,”

The measurements of the Xs are exact, which greatly improved image quality and worked for many years until better cameras were invented. In 1995, President Clinton released images from the CORONA program to the public, along with its partner programs ARGON and LANYARD so people could finally see them.

“During its operational life, CORONA collected over 800,000 images in response to the national security requirements of the time. On average, individual images covered a geographic area on the Earth’s surface of approximately 10×120 miles,” the CIA added.

Learn more about the CORONA program and the giant Xs in the video below.