Naked Man Holding Beer Runs From Cops Into Cornfield, They Bring In Drone 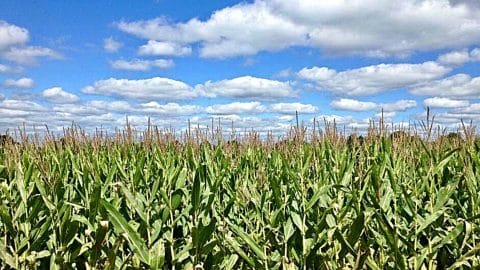 According to the Times of Northwest Indiana, the Police in Hebron, Indiana were in hot pursuit on Wednesday hunting down a man who was spotted wearing nothing but a hat and carrying a beer.

probably the most indiana thing to have ever happenedupdate: https://www.nwitimes.com/news/naked-man-with-beer-in-hand-evades-police-by-vanishing/article_14aa3eab-b4a8-5b89-ab79-d29bf67a4946.html

The man was seen running northbound on highway Indiana 55 around 6:30 p.m. according to Lake County Sheriff’s Office and someone called 911 reporting his streaking antics.

Five officers responded to the call and quickly drove to the scene where they spotted him before he took off across the highway and hid in a nearby cornfield off of Harrison St.

It was difficult for police to chase him after he took off into the cornfield so they called the Lowell fire department who brought in a drone to fly over the field trying to find him. They searched everywhere for him but, unfortunately, they were not successful in finding him.

The Story Caught Fire On The Internet

Authorities are still not sure who the man was or why he was running down the highway naked in the first place, but the story caught fire once it hit the internet. Many people couldn’t help but comment their personal opinions on the situation.

One woman Amber Buckhave commented, “I don’t know what happened to the man but after he got out I’m sure he regret going in a corn field naked you know he got cut up by the corn. Punishment served lol”

No video was ever captured of the man to show you, however, we did find a video on Youtube of a man running naked from the police you can watch below.