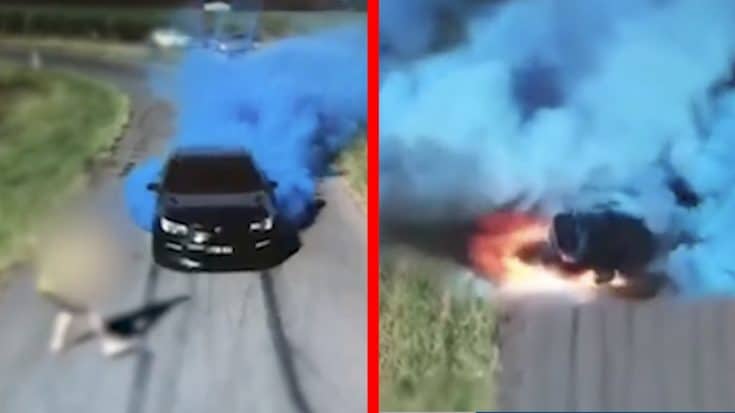 Queensland Police released a video on April 18th, 2018 of a car close to Australia’s Gold Coast doing a burnout to reveal the gender of a baby about to be born.

A burnout, in case you didn’t know, is when a car spins its wheels while it stays in the same spot causing the tires to smoke. Well, the burn out blew out blue smoke to reveal the baby was going to be a boy.

Police release the video to show the public the dangers of doing burnouts. The video was shot by a drone and everything looked fine and dandy at first as the car shot a massive cloud of blue smoke.

This Is When It All Goes Wrong

This is where the driver messed up. He should have stop the burnout in less than 15 seconds. However, he decided to let the wheels keep burning well past 35 seconds and when that 36th second hit, the back of the car burst into flames.

People were standing all around the car when it happened and they all took off running to get away from the flames. The car wasn’t so lucky though, it got burnt to a crisp and probably totaled. Note to everyone who tries this: you may end up having to buy a new car. Better yet, just don’t do it.

Watch the full video below shot by the drone.