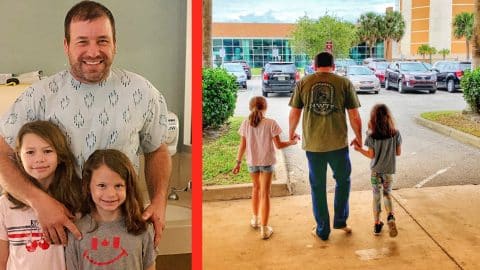 Just days after suffering from serious injuries sustained in a terrible crash during the final lap of the 2020 Daytona 500, NASCAR driver Ryan Newman was photographed in good spirits alongside his two young daughters as they left the hospital.

Newman, who is a driver for Roush Fenway Racing, was reported to be in “serious” condition at Halifax Medical Center on Monday night after being injured in one of the worst crashes in recent years.

According to his team who has been reporting on his condition following the crash, Newman was released mid-day on Wednesday, February 19th and walked out holding his daughter’s hands.

Earlier today, Roush Fenway Racing tweeted out an update on the driver, saying that he “continues to show great improvement” and was “fully alert and walking around.”

The team then sent out a photo of Newman dressed in a medical gown and holding his daughters near him as he smiled for a picture.

By the way the statement reads, it appears that the team wasn’t necessarily expecting Newman to be released from the hospital this early – but the fact that he has is great news for all NASCAR fans.

Our prayers are with him as he continues to recover.