Weeks After ‘Best Friend’ Dies, Willie Points To Sky & Cries During ‘Always On My Mind’

By Jennifer Pernicano on March 5, 2020
Advertisement 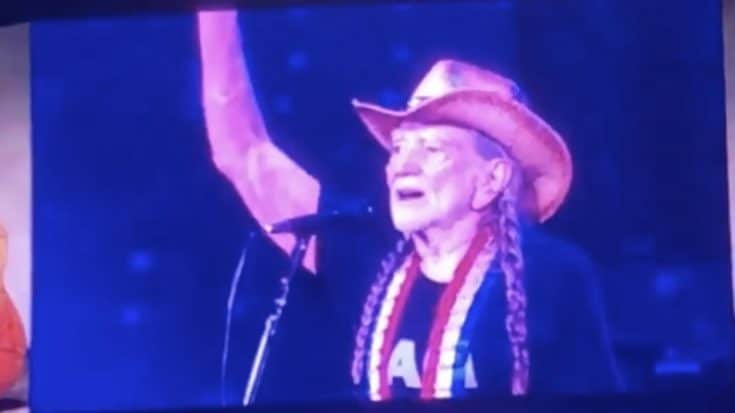 On March 4, 2020, Willie Nelson returned to the RodeoHouston stage for the 11th time. His headlining set was his ninth as a solo artist. He has appeared twice with Waylon Jennings, Johnny Cash, and Kris Kristofferson as the band The Highwaymen.

Posted by The Highwaymen on Sunday, February 9, 2020

Willie performed a 19-song set which was filled with some of his most popular hits including “Whiskey River,” “Angel Flying Too Close to the Ground,” and “On The Road Again.”

On the road again! Willie Nelson the GOAT!? pic.twitter.com/briI2c498Q

The Red-Headed Stranger also made sure to pay tribute to his late friends.

Before jumping into “Good Hearted Woman,” he told the crowd, “Let’s do one for Waylon!” The good friends wrote the song together in 1969 and Jennings recorded a solo version for his 1971 album of the same name. The two released a duet version in 1976, where it charted at number one. Willie’s son, Lukas, sang backup for him many songs, including this one, during his RodeoHouston performance.

We have so much love for this legend!❤️ @WillieNelson pic.twitter.com/fNYN3im6Gq

Three songs later, Willie said, “Now let’s do one for Merle!” The band began playing the intro to their 2015 duet “It’s All Going To Pot,” which they released as their first single off their album Django & Jimmie.

He played a couple Hank Williams songs (“Jambalaya” and “Move It On Over”) and eventually transitioned into one of his most poignant songs he has ever recorded, “Always On My Mind.”

While Willie didn’t write the song himself, he sings it as though he did. His version won three Grammy Awards and at this concert especially, it meant so much more than just a song. Just a few weeks before this performance took place, on February 12, Willie’s longtime drummer and a man he has called his “best friend” sadly passed away.

Paul English was a member of Willie’s band for over 50 years and also served as his “enforcer and bodyguard.”

“There is no other drummer who can beat Paul English playing behind me, and I watched him become the great drummer that…

Twitter users who were at Willie’s RodeoHouston performance shared that during “Always On My Mind,” the country legend cried, many thinking it was because of Paul.

A tear for Paul.

In a video a fan posted, Willie pointed to the sky several times.

“Willie Nelson shed a tear after singing ‘Always On My Mind’ at the Houston Rodeo,” they wrote accompanying the video. According to Culture Map Houston, the audience gave him a long standing ovation after this song, and he was “visibly moved by the reaction.”

Watch a clip of Willie singing “Always On My Mind” at RodeoHouston below.

Willie Nelson shed a tear after singing “Always On My Mind” at the Houston Rodeo. Iconic performance from a GOAT! pic.twitter.com/cVL4L23Ihv