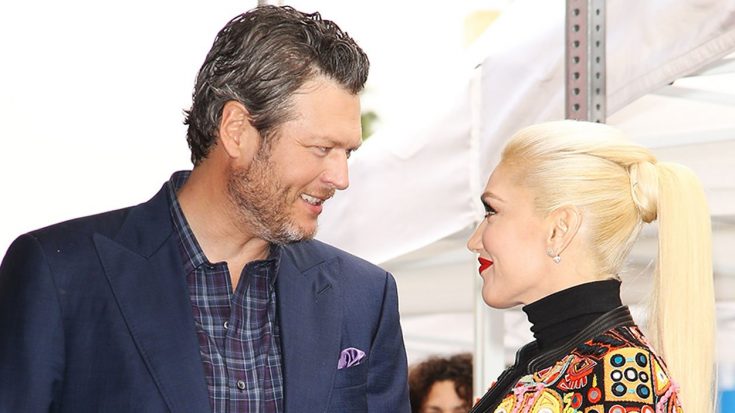 When Blake Shelton announced his eleventh studio album, Texoma Shore, fans were sitting on pins and needles to find out if there would be another collaboration with his girlfriend of almost two years, Gwen Stefani.

His last album, 2016’s If I’m Honest, included a duet with Stefani called “Go Ahead And Break My Heart,” which was received extremely well by his fans. Unfortunately, news spread recently that a “Shefani” collaboration was not going to be on Texona Shore, but thanks to some lyrics released by PEOPLE, we know that Stefani is not far from Shelton’s mind.

In the song “Turnin’ Me On,” Shelton references his lady love’s signature red lip in the following lyrics.

“Knows how to set me on fire/She’s always holdin’ the match/And when my body’s beside hers/There ain’t no turnin’ back/She’s Revlon red in the blackest night/Lighting up the room in the world just like she’s turnin’ me on.”

Stefani, as many fans know, signed on as a global ambassador for Revlon in January, which makes the “Revlon red” lyric totally about her!

Shelton hasn’t released the audio for “Turnin’ Me On” yet and we will likely have to wait until Texoma Shore is available on November 3 to hear the full song. It is currently available for pre-order on Amazon and iTunes, though!

Many also think that Stefani inspired the first single off the album, “I’ll Name The Dogs,” especially since her sons Kingston and Zuma appear in the music video.

If you are upset by the omission of a Shefani duet, you can listen to their newest collaboration, which is included on Stefani’s Christmas album You Make It Feel Like Christmas here.

Watch Stefani’s kids dance it out in Shelton’s “I’ll Name The Dogs” music video below.