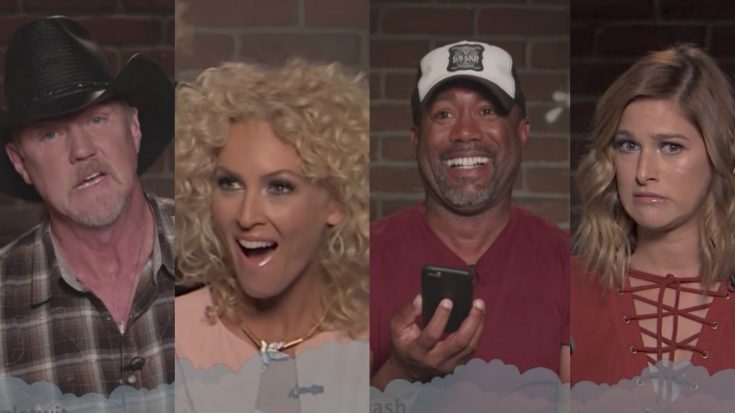 Once again talk show host Jimmy Kimmel convinced some of country music’s biggest stars to take part in his infamous “mean tweets” segment. The torturous segment requires the stars to read negative, and often brutal, comments about themselves from social media.

Little Big Town, Trace Adkins, Jana Kramer, Old Dominion and the Zac Brown Band were just a few of the stars who took part in the segment that aired following the 51st CMA Awards show. Most of the artists seemed to take the comments in stride, but others weren’t impressed.

“The Zac Brown Band is on three radio stations at the same time…as you can imagine this is the worst day of my life. #H8Them,” ZBB read about themselves.

“I want to throw Blake Shelton off a highway overpass by his legs and watch him get obliterated by a Peterbuilt pulling a big stupid house,” Blake read without emotion.

Darius Rucker cracked up after reading a tweet about himself that said, “I just heard a Darius Rucker country song, and I hate to be dramatic but it’s the worst thing that ever happened to me.

Check out the full segment in the video below and let us know which “mean tweet” is your favorite.