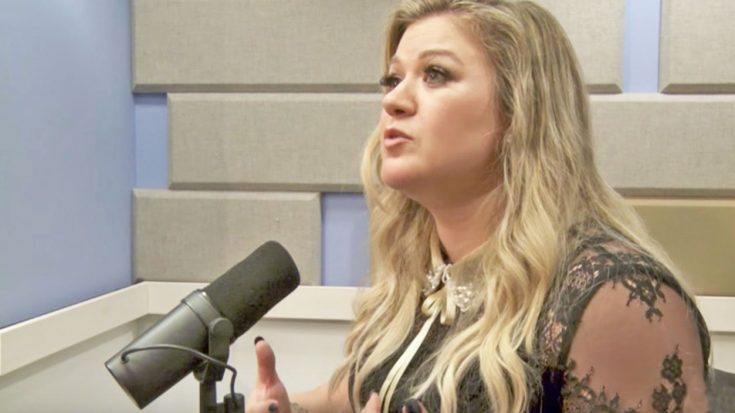 Kelly Clarkson does not want to be associated with Dr. Luke.

Back in early 2016, the 35-year-old singer sparked conversation of bad blood between her and her former collaborator. Clarkson and Dr. Luke (whose real name is Lukasz Gottwald) previously worked together on her 2004 hit “Since You’ve Been Gone” and years later in 2009 on her No.1 hit “My Life Would Suck Without You.”

Following allegations of misconduct between Kesha and Dr. Luke, Clarkson released a cryptic tweet about the producer saying, “Trying 2 not say anything since I can’t say anything nice about a person… so this is me not talking about Dr. Luke.”

Trying 2 not say anything since I can’t say anything nice about a person… so this is me not talking about Dr. Luke https://t.co/lLhtUHbmgG

During an interview with Z100 New York on Wednesday (Sept. 13), Clarkson revealed she once rejected receiving a writing credit on “My Life Would Suck Without You” just to avoid having her name printed next to the producer’s, therein giving up millions of dollars in commission from the song which went to No.1 back in 2009.

While Clarkson admits that what went down between herself and the producer is nothing like the alleged abuse between Kesha and Dr. Luke, she explained that her dislike for the producer was strong enough for her to ask to “work with anyone” but him.

“Basically, they were gonna sit on my record unless I did what they wanted. I was so frustrated because I literally said, ‘Anyone in the world but this one person. I will work with anyone you want to put in my path.’ I love people. I think that’s apparent. I think I’m a nice person, that’s apparent. It was just this one thing, and I asked not to work with Dr. Luke just because I had not a good experience with him,” said Clarkson. “If an artist like me, I generally love everyone. You have to really be a special kind of … for me not to like you.”

Once the song was finished, Clarkson’s associates approached her on receiving credit for her contribution to the lyrics, the singer refusing as to avoid having her name anywhere near Dr. Luke’s.

“They brought up writing credit at the end because they were like, ‘Well, you changed the song.’ And I was like, ‘I don’t want my name near his. I want to pretend this didn’t happen in my life, and I wanna forget it,'” Clarkson stated. “I mean God, there’s hundreds of thousands of dollars gone because of that. You know what I’m saying? Or millions, because that song was huge.”

Clarkson went on to say that by refusing to accept writing credit on the song she was trying to make a point to her label how strongly she didn’t want to work with him, continuing that there was more to her work than just making money.

“I was making a point to the people working with me going, ‘This is how much I didn’t want to do this,'” she said before continuing,”I don’t care about the money… that’s not what holds weight in my life.”

Clarkson has recently released her latest single “Move You,” the first look into her forthcoming album Meaning of Life off her new record label, Atlantic Records.

You can watch her full interview below.