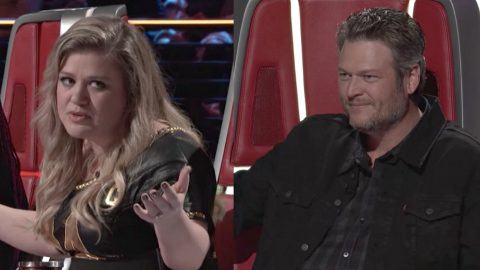 The Voice is back and if tonight’s Season 14 premiere is any indication, we’re in for an epic competition!

This season has Blake Shelton and Adam Levine returning to their red chairs alongside Season 12 winning coach Alicia Keys. Rounding out the panel is Kelly Clarkson who may be new to the Voice but she’s no stranger to singing competitions.

Monday’s two-hour premiere showcased a stunning lineup of talent as well as a great deal of insight into the dynamics of the new coaching lineup. One of the most talked about relationships is that of long-time friends Kelly Clarkson and Blake Shelton. While Kelly doesn’t consider herself a country artist, she has some deep country roots. The Texas native now lives in Nashville and is married to Brandon Blackstock who happens to be both Blake Shelton’s manager and Reba McEntire’s step-son.

It didn’t take long for Kelly and Blake to start fighting over country artists on Monday. When Kaleb Lee took the stage to sing Kenny Chesney‘s “Never Wanted Nothing More,” both coaches turned their chairs and the battle was on.

Clarkson bragged about her duet with Jason Aldean, “Don’t You Wanna Stay” and even offered to FaceTime Reba to win him over, but it wasn’t enough to convince Lee to choose her. He ultimately went joined Team Blake and is counting on the most winningest coach in Voice history to help him win the Season 14 title.

Hear Kaleb Lee sing “Never Wanted Nothing More” in the video below and let us know if you think he has what it takes to make it to the end.