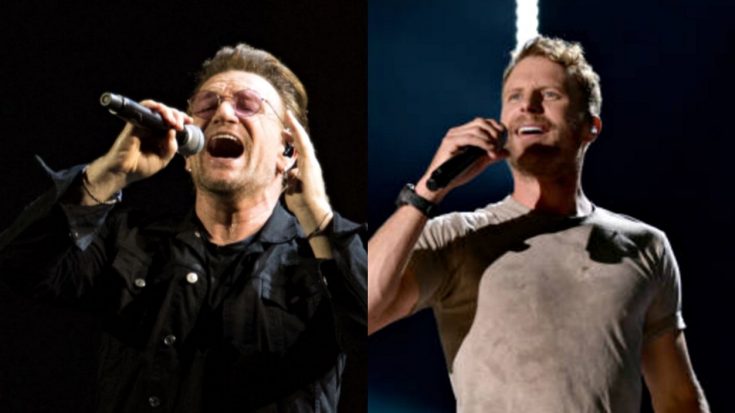 It’s no secret that Dierks Bentley is a huge fan of U2.  Bentley grew up listening to the timeless rock band and has often covered their hit song “Pride [In The Name Of Love]” in concert.

In 2011, Dierks met U2 lead singer Bono for the first time when he was in Nashville performing at the city’s Vanderbilt Stadium.

“I had a chance to sit next to him at a dinner he did with [Tennessee] Senator Frist and we talked a lot about country music and the country audience,” Bentley told Country Weekly. “He loves country music and he’s been to the Station Inn, he’s been to the Bluebird. He was friends with Johnny Cash. He wanted to learn more about the country audience.”

That dinner conversation started a friendship between the two musicians that has resulted in Bono being a mentor of sorts to the country star.  Last year, Bentley told Radio.com that he now has a tradition of sending a song or two from his albums to Bono for feedback.

“I sent him a song called ‘Freedom.’ The third verse of the song was kind of inspired by something he said to me once,” Dierks said. “So I sent him the song, and he sent me a pretty thoughtful email back; he got back to me today. He couldn’t be more supportive, it was pretty cool to get that email today.”

While Dierks’ admiration for U2 is obvious, the feeling is indeed mutual as made evident when the legendary band covered one of Bentley’s own songs during a recent tour stop.

While performing at the Superdome in New Orleans, Louisiana, in September 2017, U2 included Bentley’s chart-topping song from 2014, “Drunk On A Plane” in their set. The performance was captured by a fan who posted the video to social media where Dierks Bentley himself saw it and shared his surprise over the band’s cover of his song.

“Trying to process… U2 breaking into drunk on a plane last night in New Orleans. Can’t make this up,” Dierks wrote. “Thank you whoever posted this video. I need a drink… maybe several!”

trying to process… U2 breaking into drunk on a plane last night in New Orleans. Can't make this up. @u2 #drunkonaplane #beautifulday @onecampaign Thank you whoever posted this video. I need a drink… maybe several!

Check out Dierks Bentley covering U2’s “Pride [In The Name Of Love]” during a live 2010 performance below.