By Jennifer Pernicano on October 25, 2018
Advertisement 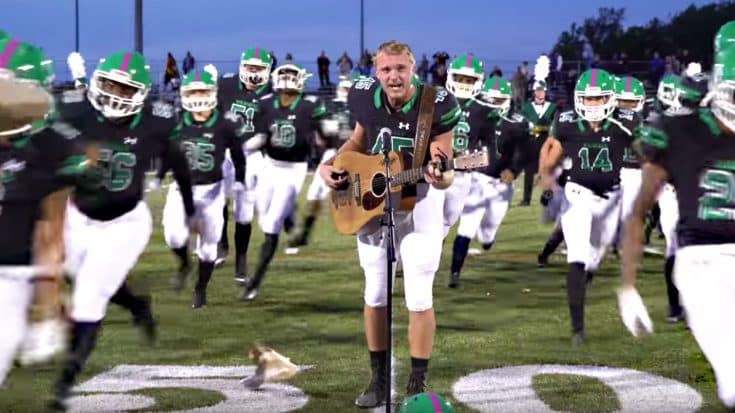 One high school senior took a chance performing a unique version of the national anthem and the outcome was incredible for him. In the town of Gambrills, Maryland this football player prepared for the big game with a little warm-up; for his vocals that is. Senior, Jackson Dean Nicholson stepped on the field before his peers and community to sing the national anthem in a way you’ve probably never seen done before.

Jackson Dean might just now being recognized for his vocals but they have been a long time in the making! The singer has been posting pictures and videos of him performing on different stages since 2015. Hoping to get noticed by Nashville’s best, Dean promotes his newest covers and music for all to see. In 2016, his young ambition paid off when he released his first album, The Flood Zone. The following year, he released his second album, Who We Are.

Today is the day everyone. The Who we are album is available everywhere !!! Please please take a listen and if you like what you here tell you're friends. You support is much appreciated.

Honoring In His Own Style

Last Friday night (Oct 19), the athletic teen surprised his teammates with his impressive skills on and off the field. The members of Arundel High School’s football team, the Wildcats, had a phenomenal win against an opposing high school. With the team’s big win of 49-21 on their home field, their annual senior night was a success. The real win happened for Dean before the game even started though.

With the marching band and cheer team standing behind him, Dean appeared on field fully dressed in his football uniform. Guitar in hand and helmet nearby, the senior prepared to do his own rendition of The Star-Spangled Banner. Embracing his twangy vocals, Dean began to perform a countrified version of the honorary tune. As he hit the final note, a banner came up behind him and his entire team came running through it. It was the perfect ending to his pitch-perfect performance.

With vocals like this, we have no doubt he has fame coming his way!