By Manly Bryant on October 8, 2019
Advertisement 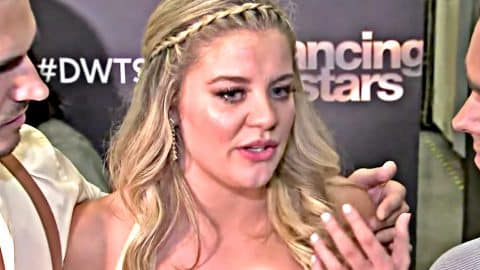 In the middle of practicing for her upcoming foxtrot to Dolly Parton’s “Jolene,” former American Idol finalist and country music star Lauren Alaina revealed her beloved cousin had suffered a brain bleed and was in a coma.

Speaking to reporters after her Dancing With the Stars episode last night on October 7th, 2019, Lauren explained that her cousin Holly – who is more like a sister to her – was rushed to a hospital in recent days due to a brain bleed and that she had slipped into a coma.

This is the day that this beautiful 15 yr old, Lauren Alaina touched James and the rest is history ….Her cousin Holly…

The earliest explanation of what happened to Lauren’s cousin came from a woman named Lisa Marie – well before Lauren spoke openly about the family’s emergency situation.

According to Lisa Marie, Holly has brain cancer – but Lauren Alaina hasn’t addressed that yet.

Speaking to reporters after she and Gleb Savchenko earned a top-tier score of all eights by dancing to “Jolene” – Lauren explained that she was dancing for Holly after leaving her side in a Georgia hospital.

In one interview with ET’s Lauren Zima, she said that Holly was “perfectly healthy” the day prior, and then the next she got a call from her mom that Holly was in the hospital and they didn’t think she would make it.

Lauren told Erin Andrews the following, according to People: “My cousin Holly had a brain bleed and she slipped into a coma earlier this week. I went home and we missed a few days of rehearsals. And I was like really stressed and my family told me to come here and I want to dedicate the dance to you, Holly.”

“We’re praying for you. We’re believing in a full recovery,” Alaina continued. “We love you.”

Our thoughts and prayers are with Lauren and her cousin Holly during this very difficult time. Watch her dance in Holly’s honor below along with two interviews.